Citizen’s initiative with over 100 000 signatures is challenging the same-sex marriage bill in Finnish parliament!

Finnish marriage movement called Aito avioliitto (roughly translated: Real Marriage or Genuine Marriage) that aims to uphold marriage as a union between a man and a woman in the law and in Finnish society has been campaigning actively last six months across Finland. Campaign closed on Tuesday (29th Sept) with 106 195 signatures (exact figure from here).

During the final week of active campaigning group of activists organized last Sunday (Sept. 27) visually attractive flash-mob in Helsinki downtown. They spread a massive 600m2 (30x20m) flag with the movement’s logo to Narinkkatori and also in front of Helsinki Cathedral. It took 10-15 volunteers to spread the huge canvas.

View to Narinkkatori from above. Photo by Aito avioliitto / Pentti Tuovinen 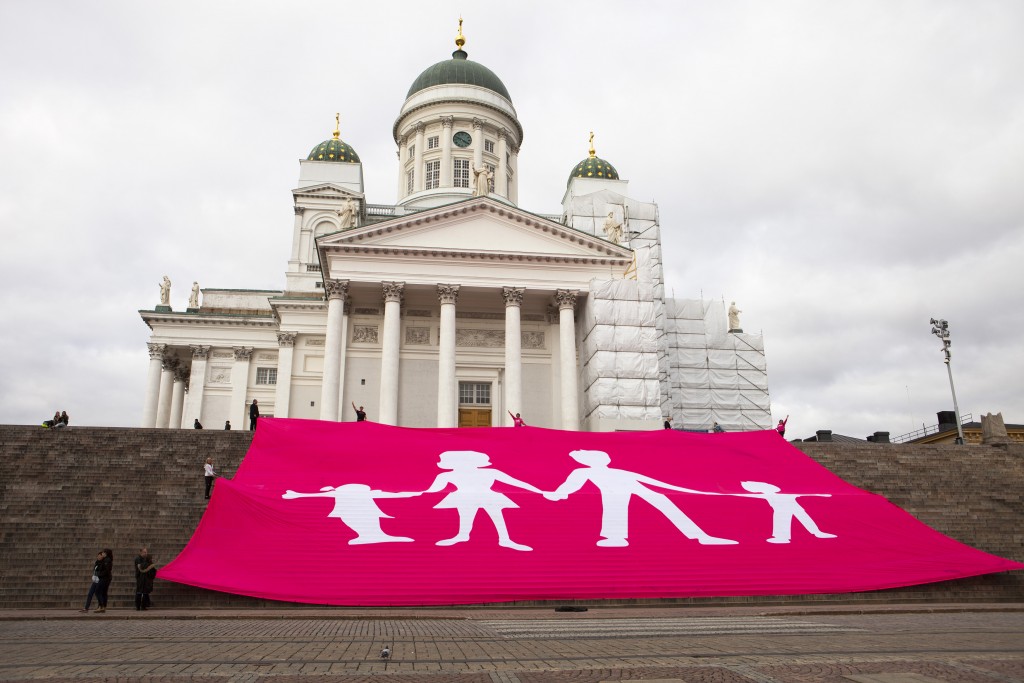 Marriage flag flash-mob at Helsinki Cathedral. Churh distanced itself from what they called ”unauthorized advertising of marriage on their stairs” because ”within the church there  are various views on the subject”. Photo by Aito avioliitto / Pentti Tuovinen

During the demonstration at Narinkkatori the chairman of Aito avioliitto –association, Jukka Rahkonen, reminded people in his speech about the uniqueness of genuine marriage:

— Only a marriage between a man and a woman can offer a child both a mother and a father. Gender-neutral marriage law would effectively nullify motherhood and fatherhood from the law, Rahkonen said.

Aito avioliitto has underlined during its campaign children’s natural right to mother and father using such slogans as ”Two fathers cannot replace a mother” and ”Two mothers cannot replace a father”. There have been a lot of verbal assaults on campaign activists, particularly in Helsinki, and at least one attempt for physical harm where unknown substance was thrown inside campaign booth.

— It is startling to realize how controversial the classical understanding of marriage has quickly become when so many people simply forget the basic rules of good behavior when they meet our volunteers collecting signatures. We are “disgusting people” simply for holding the view that marriage is a union between a man and a woman,

says Pasi Turunen who together with Rahkonen launched the citizen’s initiative six months ago.

The Aito avioliitto campaign has collected over 101 110 signatures by now.

— We were confident that with this speed we would reach 100 000 signatures in few remaining days, says the press secretary Pasi Turunen from Aito avioliito association. — This is a remarkable feat in light of the fact that we have not received hardly any media-attention and that mostly negative. Only after we reached the legally required 50 000 signatures media made some news reports about our initiative. Our volunteers across Finland have done absolutely fantastic job.

Whatever happens Aito avioliitto is here to stay.

—  Now we expect that our citizen’s initiative, as required by the law, will be considered by the parliament with equal seriousness as any other citizen’s initiative, says Jukka Rahkonen. — Whatever happens, however, Aito avioliitto association is here to stay and we will keep promoting the marriage as a union of one man and one woman in the Finnish society and in the legislation and to work for the children’s right to have both a mother and a father.

Finnish parliament voted and accepted (105–92), against the well-reasoned recommendation of its own Legal Affairs Committee, the same-sex marriage bill in the end of November 2014. This came as a result of  citizen’s initiative promoting ”marriage equality” aided by massive media-hype that quickly collected over 160 000 signatures. Same-sex marriage bills proposed by single parliamentarians had been rejected several times in parliament before (2006, 2009, 2012). President Sauli Niinistö signed the gender-neutral marriage bill on March 2015, but the law is not coming into effect until March 2017.

Aito avioliitto association was founded in January 2015 when a group of concerned citizens, who until November 2014 had only shared information and thoughts on the same-sex marriage in a Facebook group, felt the need to organize and wanted to see what can be done in order to promote the traditional view of marriage in the long run and also what can be done to possibly repeal the same-sex marriage bill before it comes into effect in March 2017. Aito avioliitto -association is not affiliated with any political party or denomination.

Aito avioliitto is part of a European wide marriage movement and an official partner with the French La Manif Pour Tous and has permission to use the same logo.

Citizen’s initiative is a new form of participation on the state level, taken into use in Finland on 1 March 2012. It offers citizens a possibility to have their initiative considered by the Parliament. A citizens’ initiative may include either a bill or a proposal that a bill drafting process should be started. An initiative may also concern amending or repealing an effective Act. Once the initiative has collected minimum 50 000 valid signatures within six months parliament must take it into consideration. 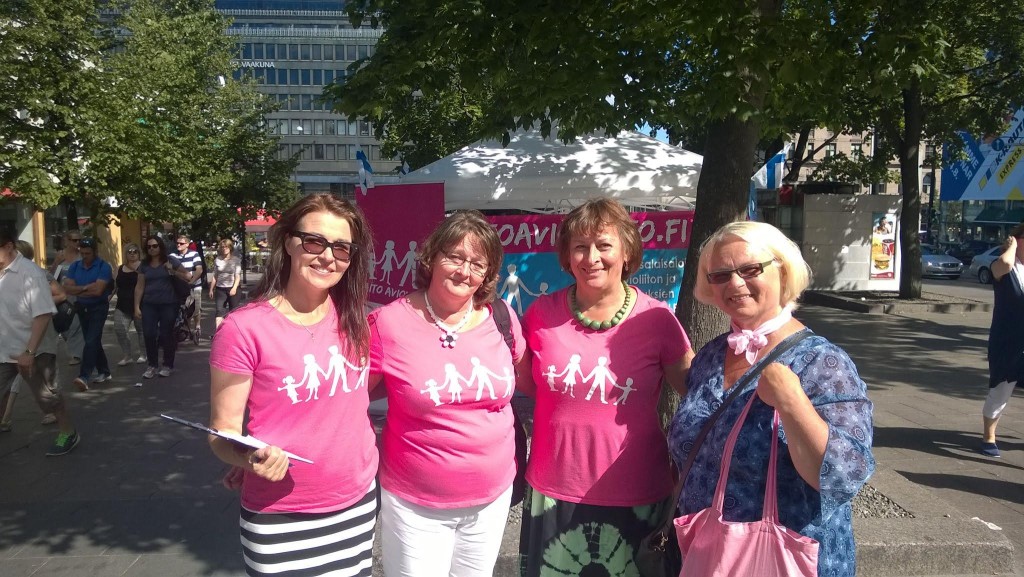 Finnish activists and volunteers have working whole summer collecting signatures for citizen’s initiative that aims to keep marriage defined as a union between man and a woman. 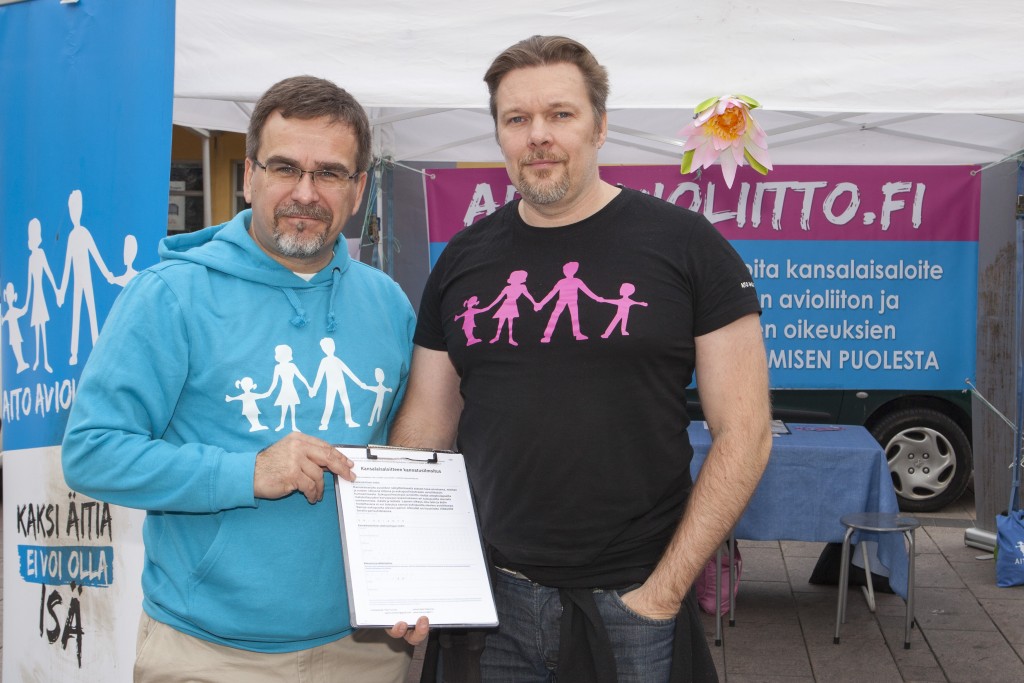 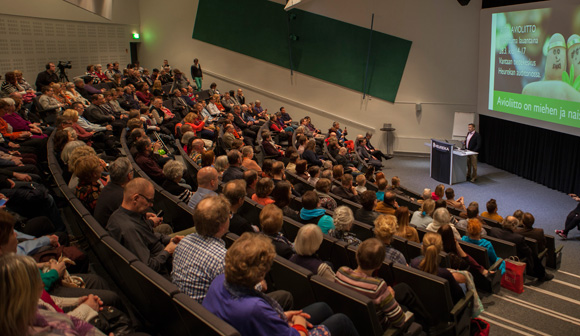 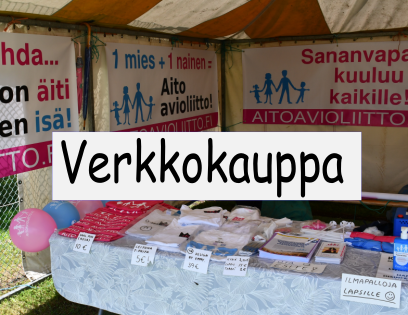